Festival of the Forties

It was my first time performing at Festival of the Forties and having never been to this particular 1940’s event, I was unsure what to expect! 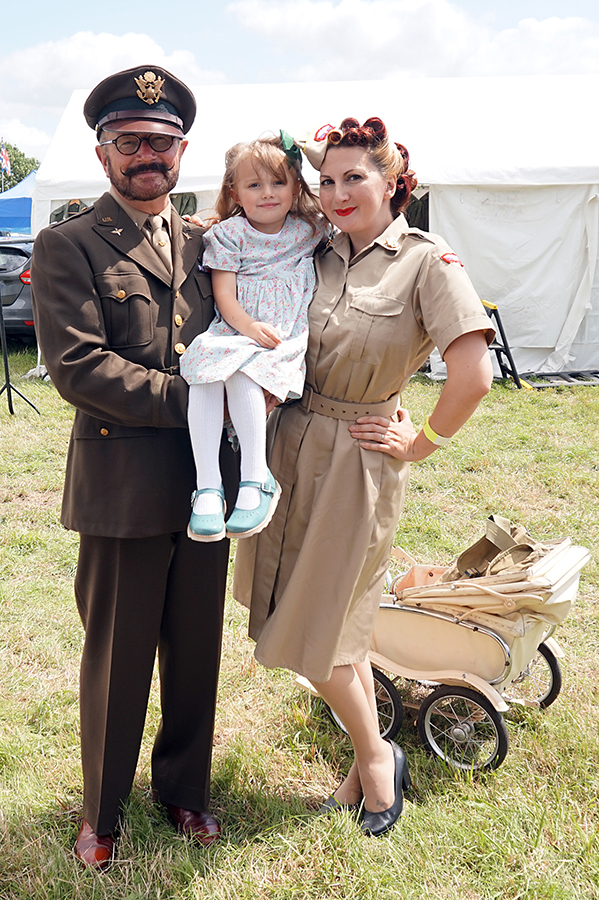 The first thing that struck me was the amount of reenactor displays around the edge of the field. There seemed to be more reenactors than public, which really surprised me. The groups had obviously gone to great lengths with their living history displays and they deserved far more people oggling their hard work! 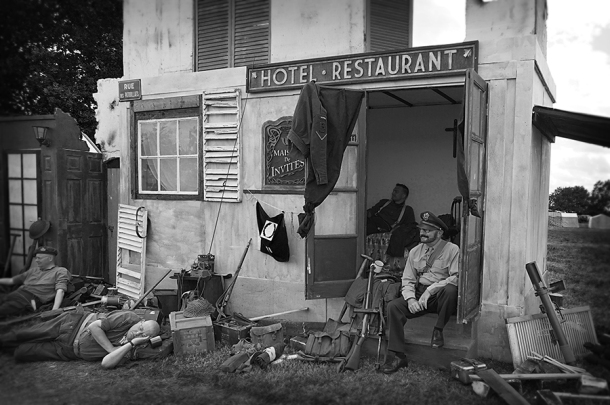 I was performing in the main marquee and was pleased to see my friend Woody at War. He is one of the best DJ’s on the circuit and always a great help. The weather was scorching, so it was an oven on that stage! Although the heat was slowly baking us to a crisp, there was a very dedicated couple, who were fantastic dancers. They certainly added life to the show and it was a pleasure to watch them as I sang my way through the 1940’s classics.

Another familiar face was my Facebook friend Hiroki. I have not seen him since I used to perform at War and Peace Show each year. Hiroki travels all the way from Japan every year to take part in UK WWII events. The other wonderful thing is that he even wears his grandfather’s original wartime uniform!

The piece de resistance was definitely the battle reenactment. As viewers, you were close to the action and fully engrossed in what was going on. A stand-off between American and German troops took place before our very eyes, using foot soldiers, Jeeps, a German bike with sidecar, tank and artillery. It was Betsy Rose’s first reenactment and she was absorbed with the action (but donning ear protectors as she is no good with loud noises). 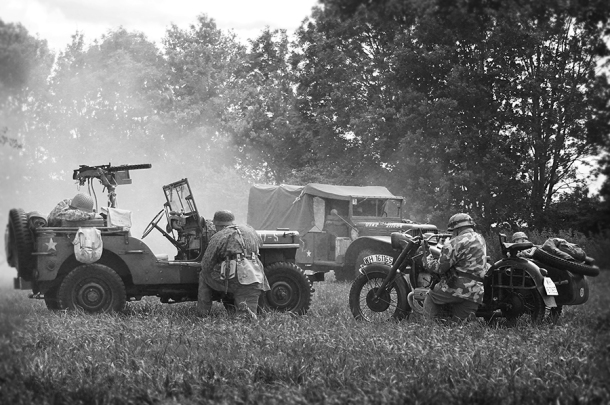 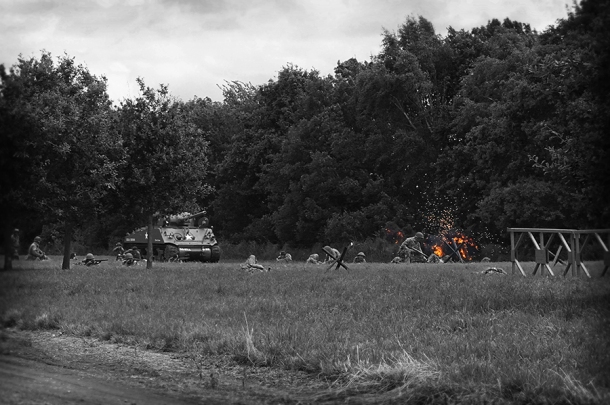 The only thing I would’ve liked to have seen at the show was more vintage stalls and more healthy eateries (like the greek chaps I have seen at some shows), but this is just my personal opinion and certainly doesn’t effect the show. It was just so hot that I didn’t want greasy fish and chips, hot pie and mash and don’t like spicy stuff!

I am still surprised that the footfall wasn’t greater as the event is obviously going to grow and grow each year. Maybe it just takes word of mouth to get the show the visitors it deserves. 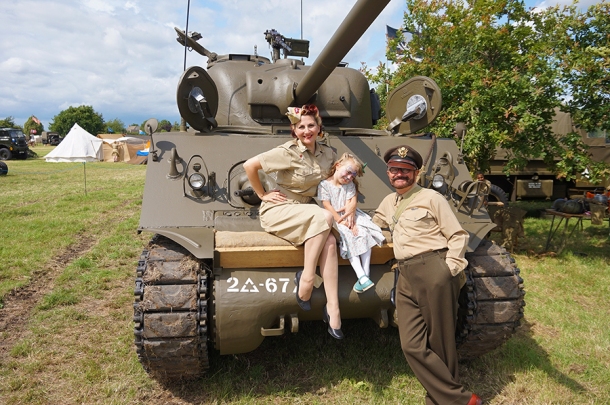 How lucky were we with the weather?! Even when we arrived, my weather app said it was 65% chance of thunderstorms and showers from 2pm. Bletchley Park Vintage Weekend stayed hot and humid until we left!

Today we were all wearing vintage. Richard was in is WWII American Navy gear, I was in an original 40’s crepe dress with studded detailing and betsy was in an adorable vintage dress with chickens embroidered around the bottom!

We headed once more to the vintage tent to have a look at the stalls (sunglasses were a must-have purchase as I was not prepared for the sunshine at all!) and then on to the mansion restaurant to order lunch and sit in the sunshine, whilst Betsy made the most of the play equipment. Got to say that the ribs were scrumptious, but at events like this, it does get VERY busy with a long queue at lunchtime. 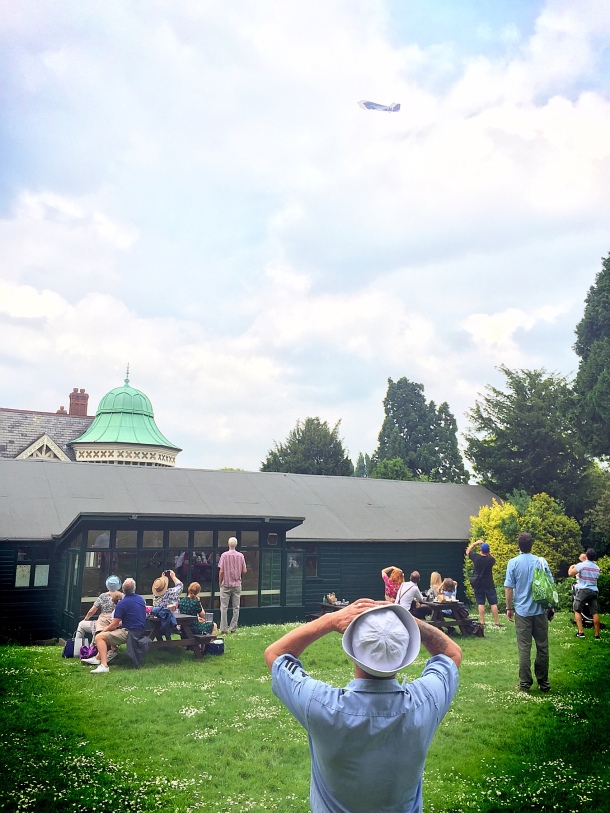 We need to do the whole weekend next year so that we have time for a tour around the huts too. It’s a bit tricky with a 2.5 year old that just wants to run around, ride on the back of swans and talk to everyone who will listen (how she went to the toilet, what colour her toenails are, various songs from her extensive repertoire…”and on that farm he had some shoes ee-i–ee-i-oh, with clip clop here and a clip clop there…”).

We did manage to watch the lindy hoppers in the main marquee, who were lovely. 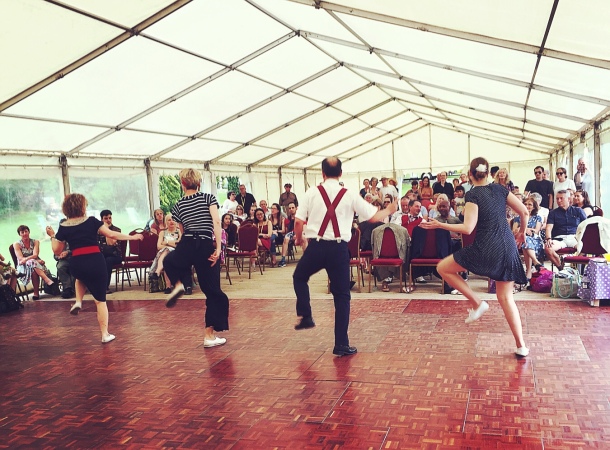 There was then a short dance tutorial, where Betsy went around offering the dancers gummy bears as sustenance. 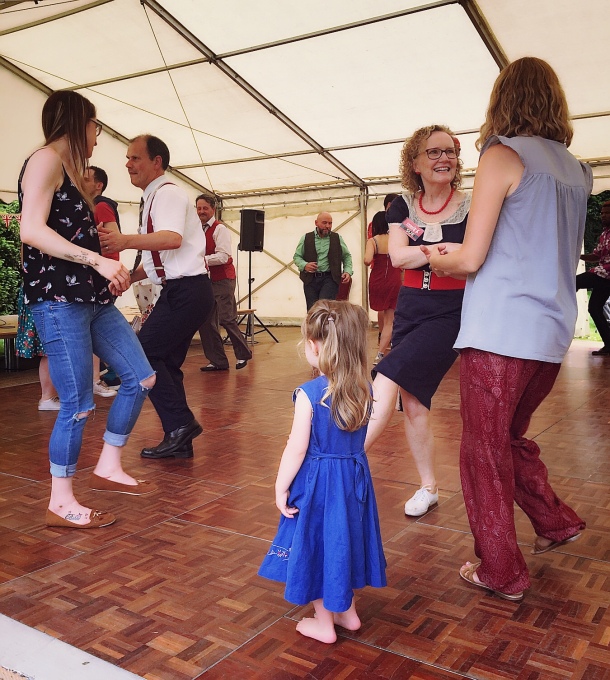 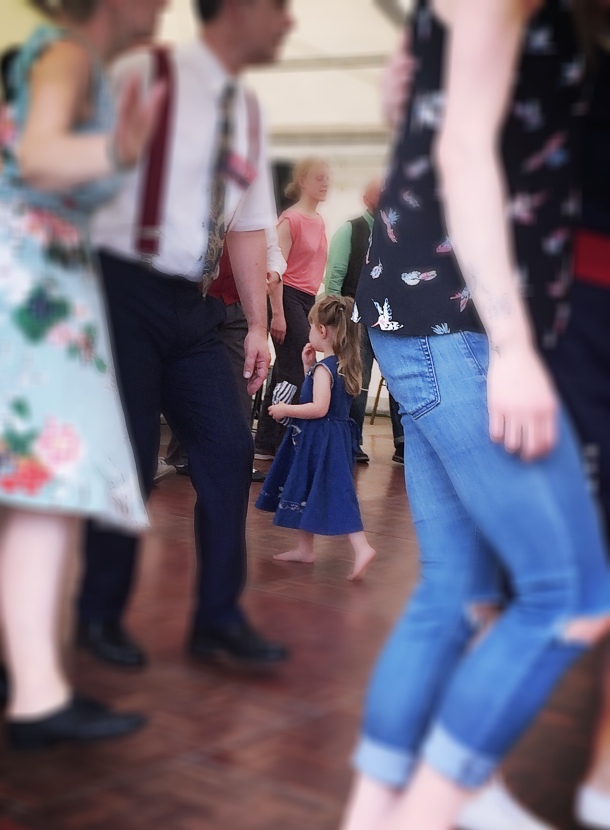 My singing set went really well, albeit performing in a sauna! Lovely audience yet again and even some dancers braved the heat. It was amazing to glance over at the swans and lake, people dressed beautifully in their vintage fashions and bask in the incredible history of Bletchley.

Kitten Von Mew Singing < click the link for a video! 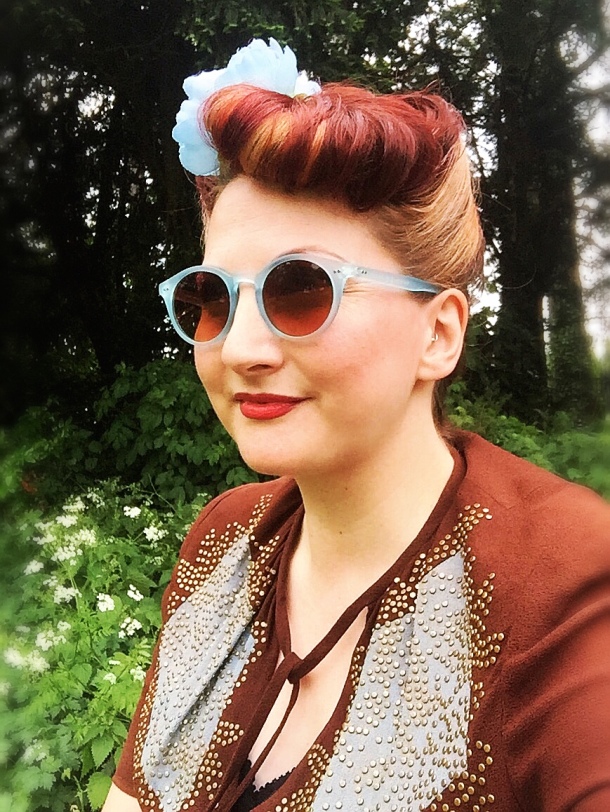 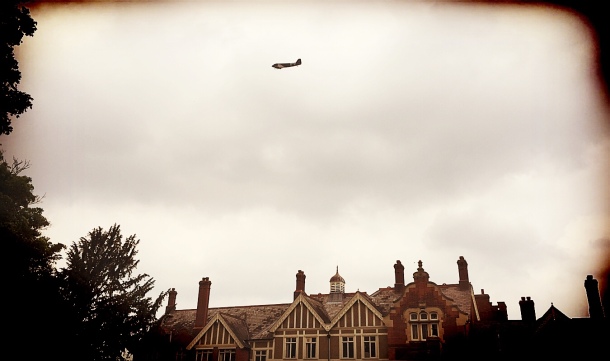 Thank you to all those who came and showed support, it really does mean the world to me.

Well we arrived at midday and although we had driven through fog and rain, the day stayed beautifully clear and warm. I even had to take my thermal vest off!

As I had a while until my performance, we went to check out the entertainment marquee (situated by the beautiful lake and a very handy traditional sweets stall) and then went to peruse the vintage stalls. Well, the choice was so much better than previous years! Bletchley upped their game and are thinking of having even more next year.

Some great custom and vintage hats, some really super menswear (tons of waistcoats!) and rails of clothing, tables jewellery and sunglasses.

I had to stop at Debbie’s Vintage World as she always has some really wonder pieces from America. It’s been a while since I treated myself, but came away with a gorgeous mustard coloured, wide brimmed hat (40’s/50’s) and this jolly little fellow! Seems to be lucite and celluloid from the 50’s. 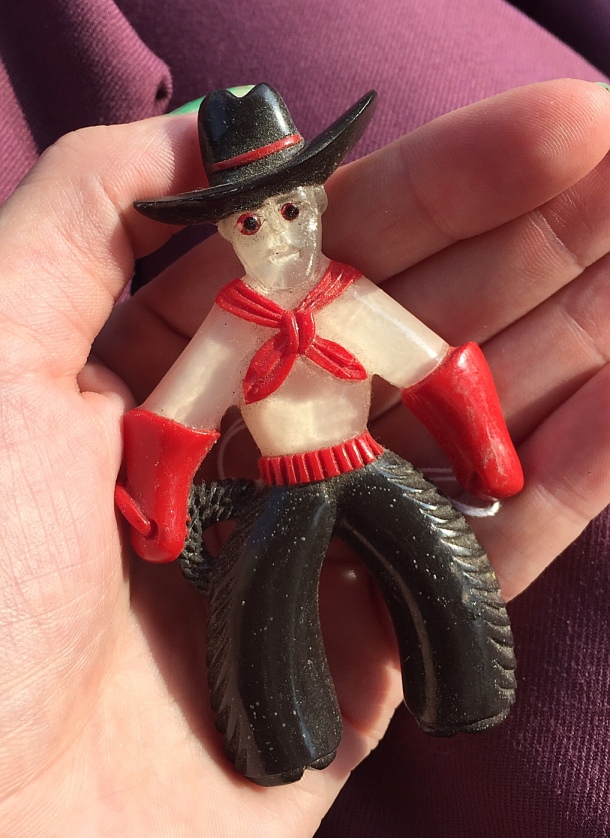 Considering yesterday was the first day I have felt vaguely human since my tonsillitis, sinus and chest infections, today was a big test for the old vocal chords! I was due to sing 2 x 30 minute sets, but ended up doing a full hour. I really enjoyed myself and put up a live feed on Facebook for people to watch. Unfortunately, 10 minutes towards the end someone sat on the chair containing my phone…even though they saw it there and still sat down…so you can hear but not see me!

Betsy very much enjoyed all the attention she received in her vintage seersucker dress and droptoe pram. Richard wore an original American WWII Civil Air Patrol uniform and I went with some lavender Heyday trousers and a cotton blouse. I did have a 40’s oriental jacket over the top, but it got way too hot. 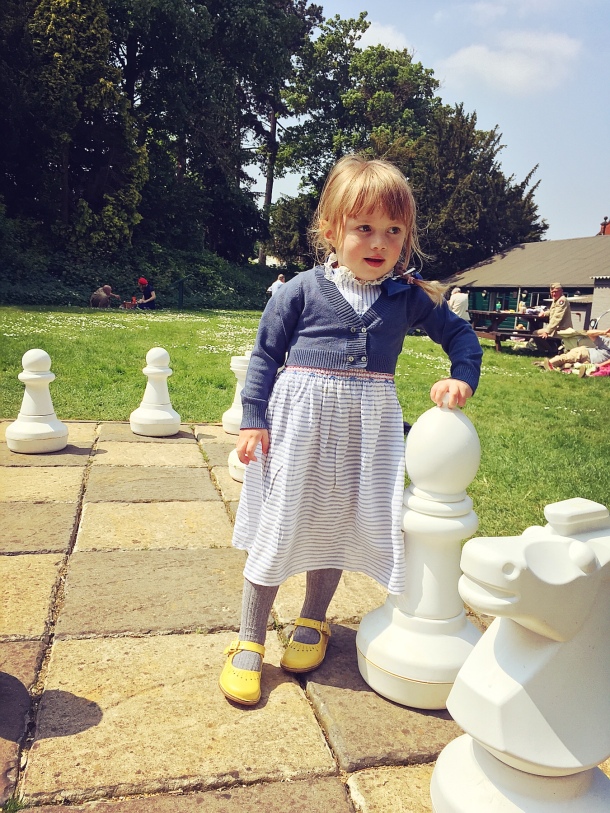 Tomorrow is meant to be warm with a threat of thunder, but I can’t wait to go back! 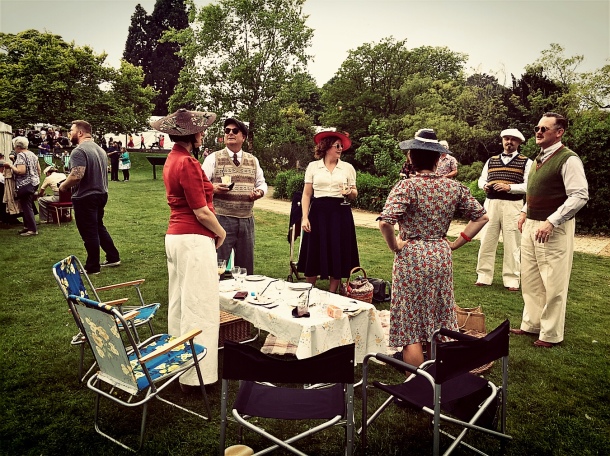 Battles For Victory this Weekend!

I cannot wait to perform at this event! I will be doing a burlesque dance at the Saturday evening Dance to Victory and then a singing set on Sunday at the main event. Viv the Spiv, Swingtime Sweethearts and many more well known entertainers will be there!

On 23rd September Mr. Mew and I jetted off to Chicago to a WWII event in Rockford Illinois. This was a huge excuse to meet up (for the very first time) with 2 friends from Facebook who’s friendship became so great that I felt like we were long lost relatives.

Unfortunately for everyone else I had over done the drama of my diva bride role at Goodwood Revival the weekend before so ended up with Laryngitis and lost my voice. I was mortified as I was supposed to be singing and performing in Illinois and felt like I was letting a lot of people down. Don and Stephanie did their best to put my mind at rest and were so incredibly generous and sweet to Richard and I.

I couldn’t have been the best company with sniffles, coughing fits and temperature, but everyone made us feel so welcome and the event itself was spectacular. Based at an open air museum in Rockford, there was a large wooded area where camps had been set up and a few trenches dug throughout. There also a huge expanse of ground with around 7 old wooden slatted buildings ranging from homes to a hospital and church. There was also a large straw barn, water tower and stable block and a street with a blacksmith, cafe, bank and shops. This street was also where a battle reenactment took place!

Battle Reenactment down the main street taken by KvM

Attending the wounded taken by KvM

Certain groups were stationed in the houses including the WACs in the old hospital. In the central grass clearing there were more army tents set up and towards the barn/ stables were a few vintage military stalls.

Kitten and Richard at the Rockford WWII Weekender

Inside the Rockford Hospital - WACs Post taken by KvM

It amazed me that some things you can get over here are quite expensive (OTT 1940’s swing ties £20 and up) but over there you were looking at the equivelant of £5. Apparently civilian fashions in South America in WWII were muted colours of grey, navy and black; not like the glamorous pieces in Hollywood films I innocently thought were factual. People seem to be more into the military side of things and civilian are only lightly touched upon. Even then, they tend not to go for the garish ties that I love (hurrah for Mr. Mew who snapped up 2!). 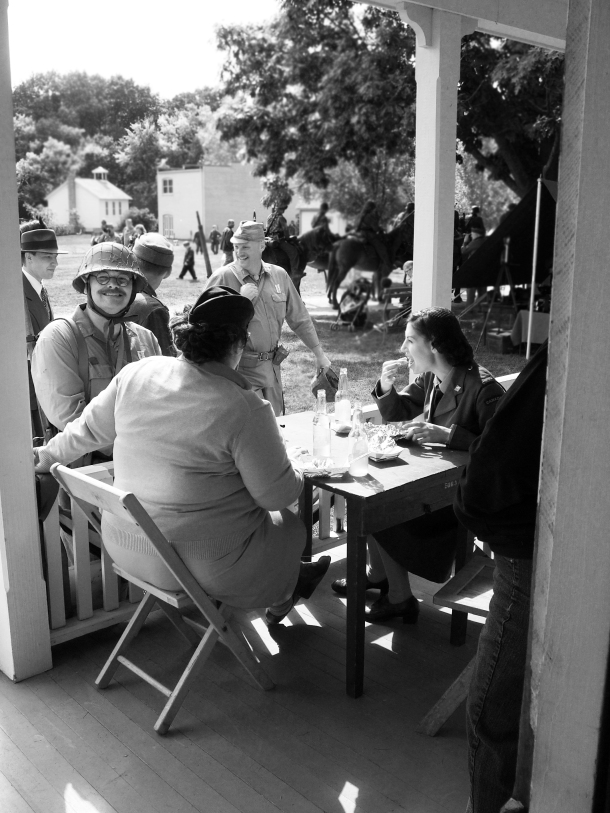 One of the best parts of the weekend (other than the wonderful hotel room that aided my poorliness) was a right on top of a Sherman tank through the woods! Richard sat astride the great gun barrel and I batted away branches with 4 others right on the very top of the tank. It was a wonderful feeling and you got a great view of people’s camps.

Richard on the Sherman Tank! Taken by KvM

On the first day I was only well enough to stay for 2 1/2 hours before retreating back to the hotel and to bed. We had been  up for 24 hours with 3 hours sleep after that, so needed rest! The next day we went to the event early and even got to visit the Rockford Museum – Home of Sock Moneys and the Rockford Peaches Baseball Team!

We got to meet the apposing team (well, 2 of) when enjoying a rest in the woods. They get the uniforms specially made for each girl, don’t they look authentic?! We missed the game itself which was a shame, but greta to meet the girls. 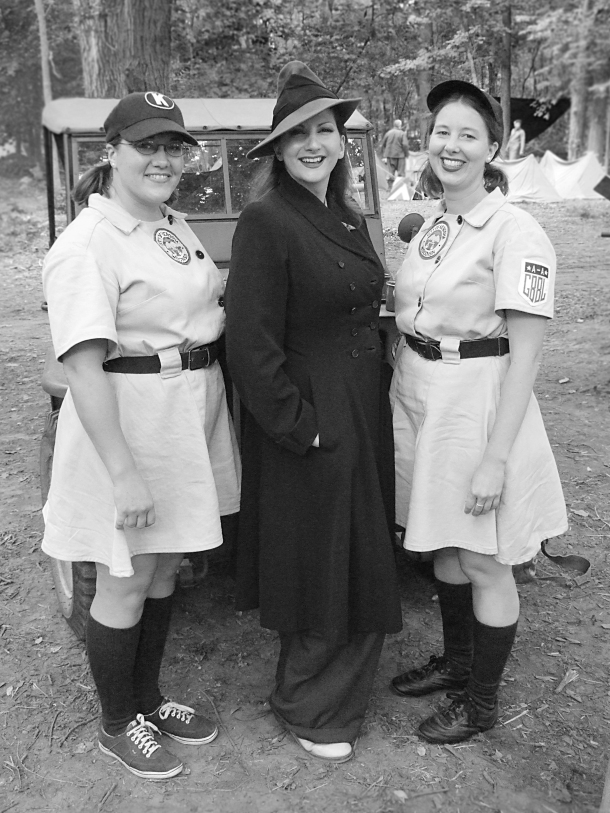 I loved seeing their cavalry horses, which is something we don’t see in British WWII events. Of course the Polish and Germans used horses at the beginning of the war (including other countries). It was a wonderful site, although strange seeing Americans dressed as German soldiers. On speaking to an Iraqi veteran about this, I was informed that the Germans had actually taught the American armies battle techniques, how to march and fight in the 1700’s and that some of their ancestors had been German. 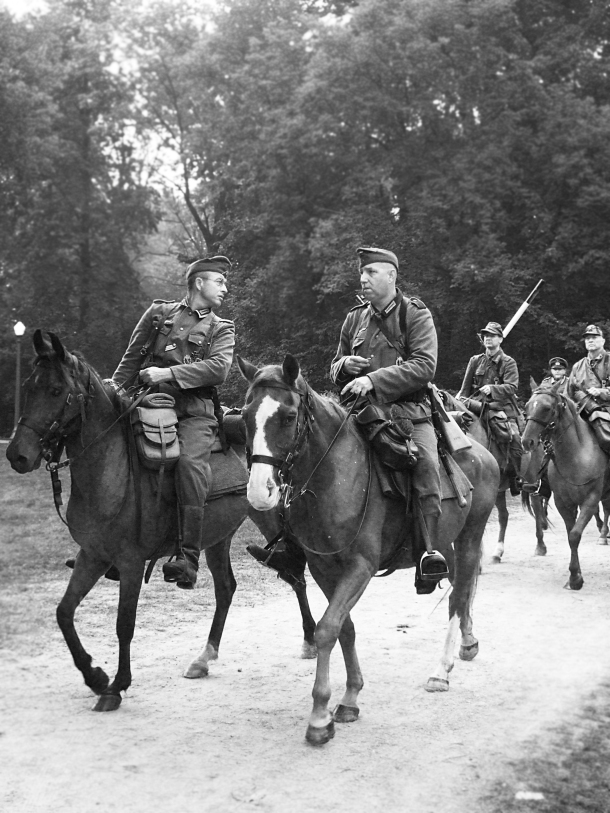 On the Sunday, just before leaving, Richard and I decided to go for a stroll in the woods. It was gorgeous and we spotted some Chipmunks! There were also a couple of baby squirrels that had obviuosly fallen out of their nest as they were too young. They kept following our shadow until 1 climbed up on Richard. Weirdly enough this isn’t the 1st time this has happened to me! Stephanie and Don didn’t believe us when we came back with the excuse that we had been attacked by baby squirrels…Until they saw the evidence…!

Baby Squirrel on Richard's Back! Taken by KvM

Richard and I would like to say a HUUUUUGE thank you to everyone for making us feel so welcome, despite being unable to perform or speak much. I promise that I will make it up to you all and will be back…fit and healthy!!!