“Like most people, I first met Kitty a few years ago when photographing her at a show.  I regularly cover the War & Peace Show for a magazine, and Kitty is one of the performers at this major event.  Like the true professional she is, even before we got to know each other Kitty would always help me out by looking directly at the camera at key moments, enabling me to get the shot I needed.

With time we developed a friendship and I was privileged to be invited to Richy & Kitty`s wedding, which I was able to capture on ‘digital film’. It`s always a pleasure working with Kitty, as she has an ability to pose perfectly and the cheery dedication to make it all look like fun, even when her feet are aching and she`s freezing cold!

I`ve chosen these ten shots, not necessarily because they’re the best photographically – but because they say to me a little of Kitty`s bubbly and cheeky character. ” (Ade Pitman) 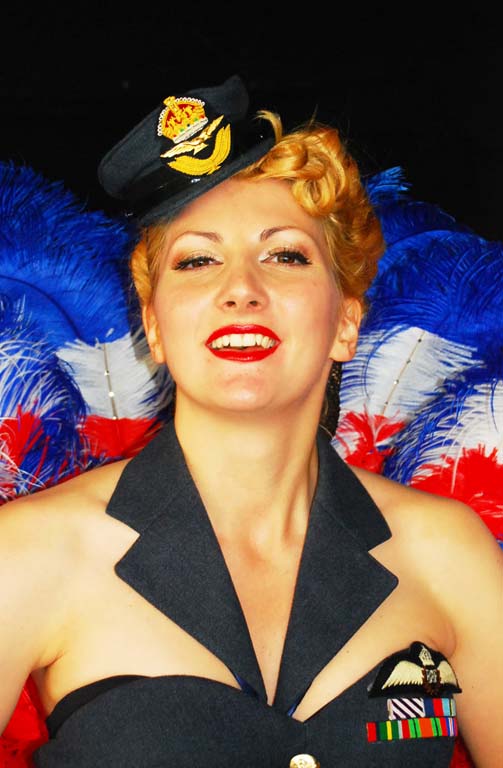 This was one of the first shots I ever took of Kitty, and the first time I’d seen Burlesque. It remains one of my favourites as I just love the way the feathers frame Kitty.

This image was taken at the Llanhelith 1940s dance. It’s not a great shot, but I like it as it captured the cheeky wink that is so ‘Kitty’.

Taken during Kitty`s ‘USO Show days’, and was featured in my magazine article about the W&P show that year. Kitty`s smile and the great colours make this photo for me, which features in my RPS Licentiateship portfolio.

A rose between four thorns! Kitty bringing some cheer to the troops (some of my reenactor friends ) and having a great time in ‘The Mog’, Somalia; or a display at the W&P show

As Kitty walked down the aisle on her wedding day, she was every bit the personification of grace and beauty. I chose to make this one a slight blue tinge, rather than sepia to mirror the silver halide films that better complimented the cool tones of Kitty`s gorgeous dress.

We have this framed in our living room. I love the colours. I was telling Richard where we should look to get the vintage ‘starry gaze’ look and didn’t realise he was looking at me so completely besotted. Made my heart go all wobbly when I saw this picture as I was oblivious!

Captured the essence of the act completely