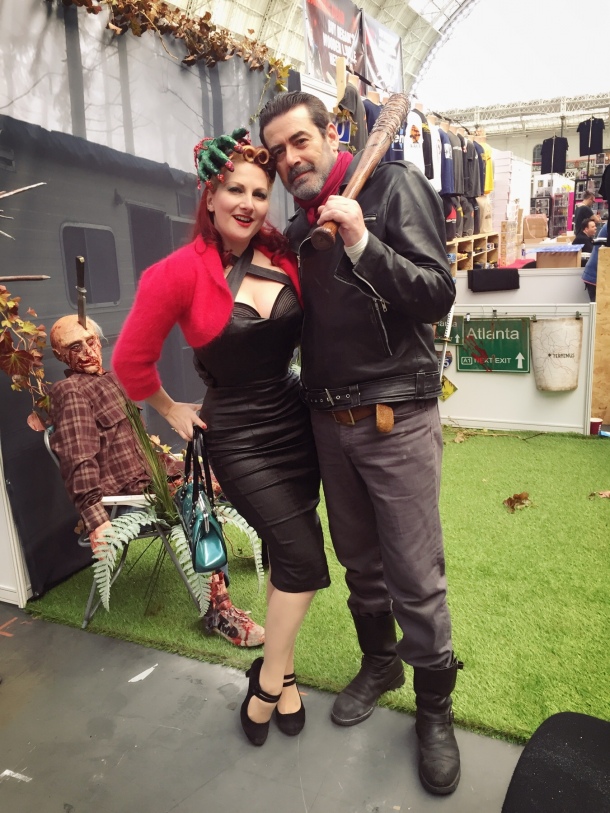 Now, I remember whinging about MCM Comicon and the fact that was just stalls and a minor scattering of C-list celebs, but Walker Stalker was an absolute money scam! I’d made a cool zombie hand hat and everything!

The tickets were about average cost if you managed to get a BOGOF deal for general admission (£44 for both of you), but if you wanted something a little more upgraded then these were the options…

£190 got you earlier entry, a special lanyard (oooooh…), special VIP queues for autographs and photos. You don’t actually get an autograph or photo in this deal.

For a mere £660 (?!) your Gold VIP pass will get you early entry, special lanyard, 2 photo ops and 2 autographs, special seating and special lines for photo/autographs.

The Platinum VIP pass was only a poultry £1320.00 each and gave you 4 photos, 4 autographs, lunch, a basket full solid gold kittens…wait, no a special pin badge and lanyard, special seating away from the commoners and special lines. But remember…if you have kids, you need to buy them Platinum passes too or they aren’t allowed in…

So you’ve got your pass, now to catch a glimpse of your favourite Walking Dead actors. Want a quick snap on your phone to show who’s here? Nope…special people designated to each celebrity scan the crowd and stand in the way of anyone trying to take a snap. 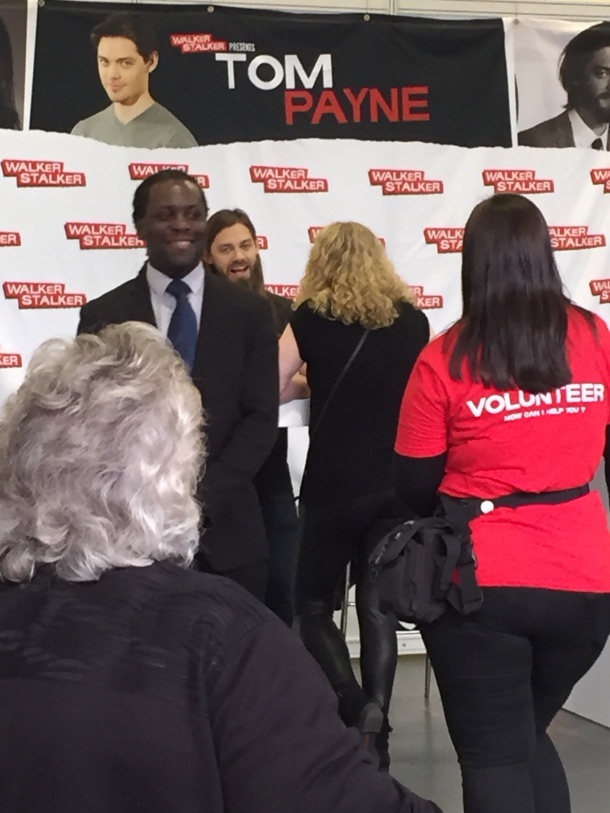 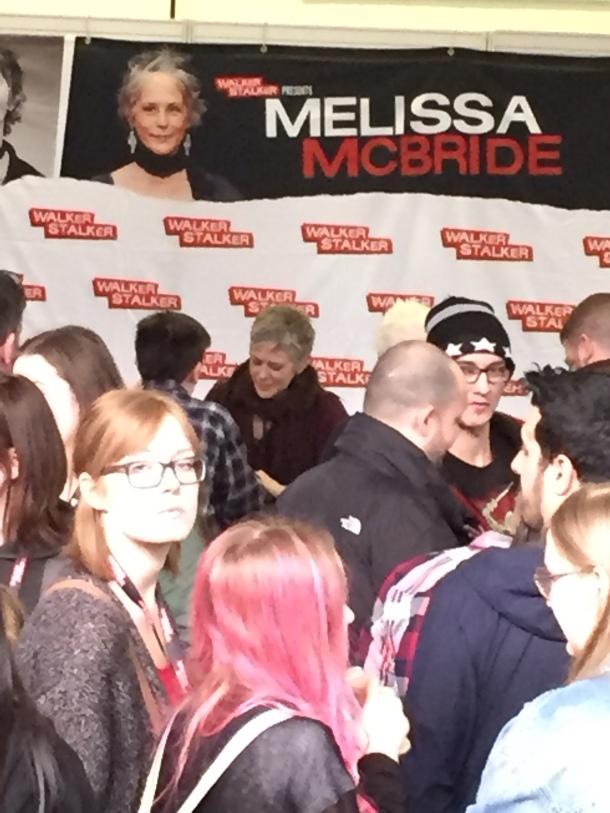 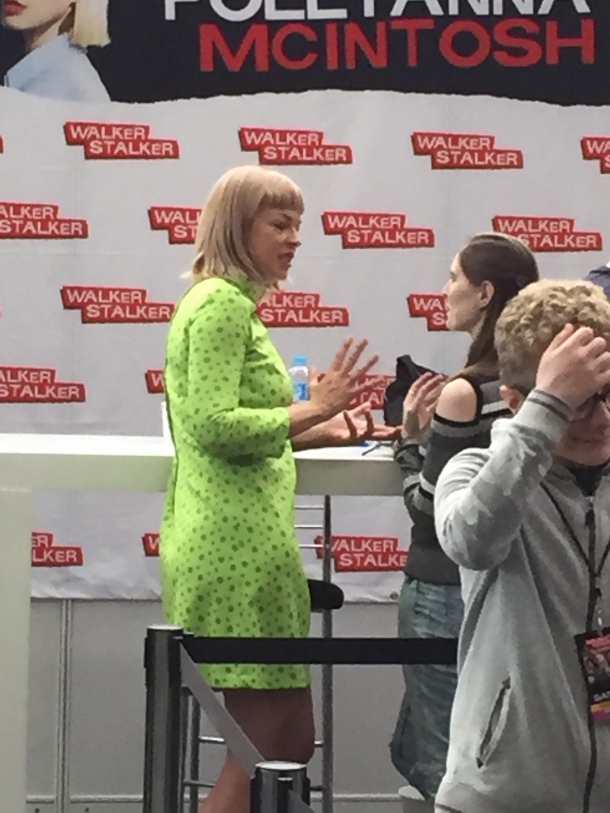 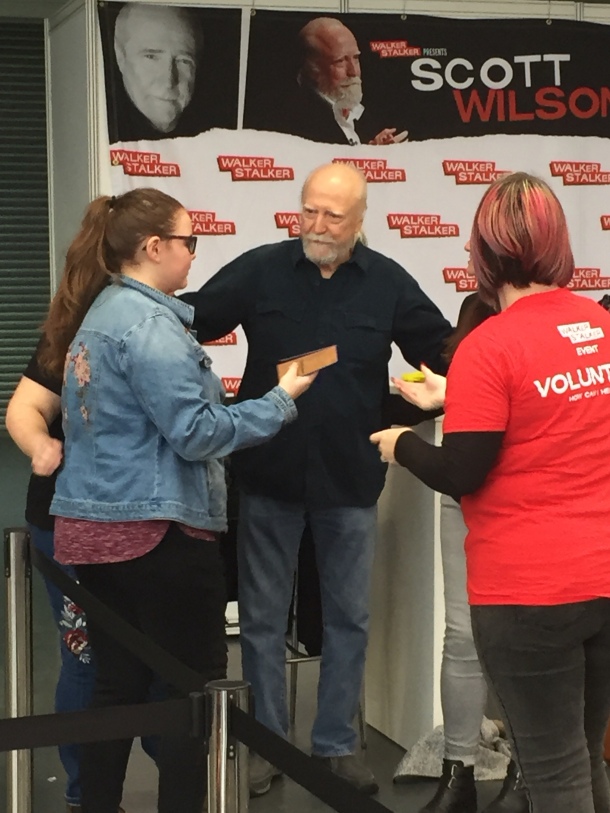 Ok, so how much for a photo op? Well you’re talking between £80 and £115 for each of the Walking Dead cast, £67.50 odd for each of The Sons of Anarchy guys and even Bruce Campbell (*swoon*) was only £67.50. For that price you get a professional 8 x 10 photo of you and your chosen celebrity. Want a quick chat? Not a chance. It lasts around 4 seconds. Click…”next!”…click…”next”…lucky I looked bloody fabulous and Bruce loved the outfit and was a really amazing guy, so I got more than a friendly nod. He also changed his pose drastically for each shot. Seriously, I’ve seen some of the Norman Reedus pics and there may as well have been a cardboard cutout. Remember, none of those prices include an autograph.

Right, you want one of those now? Maybe you want your photo op picture signed or a piece of memorabilia? Sure! That’s £40-80 per item depending on celebrity please! And you want a quick snap taken with them too as you’ve queued for over an hour to see them? Sure! They only charge £40 TO £60 FOR A SELFIE! Still think this is value for money??? 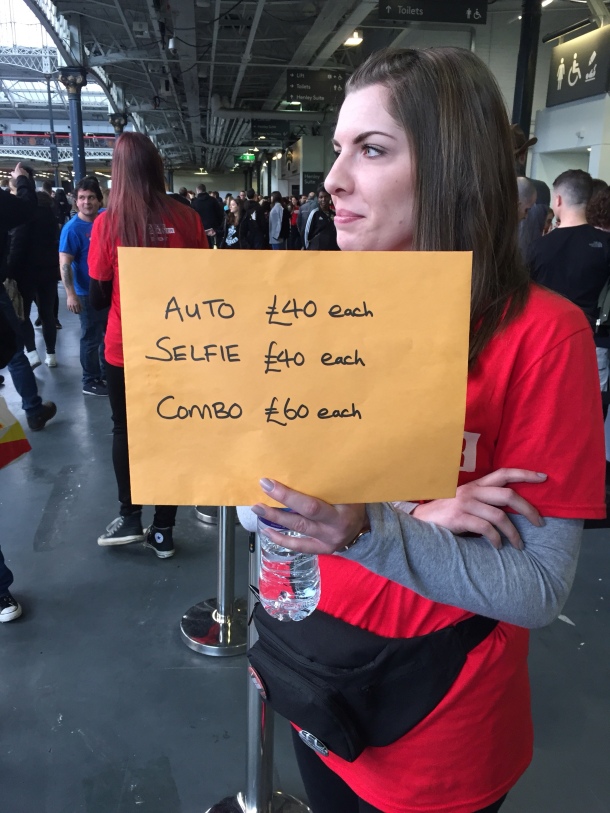 Don’t forget that some celebs are ‘cash only’ and don’t let you know until you’ve been queuing to the pay point. Then you have to queue at the only working cash machine at the front entrance and rejoin the autograph queue again (if you stomp your foot like I did) or go back to the end (like someone else). I queued up for Bruce Campbell and wish I had not said I wanted an autograph on my photo op picture as the woman wouldn’t allow me to still have an 8 x 10″ movie still although I paid the same as everyone else. He was great though, remembered me from the photo op and had a great little chat. He even said that people who made an effort dressing up should be let in for free. After saying goodbye he called out “Meow Baby!” Which pretty much made my day! 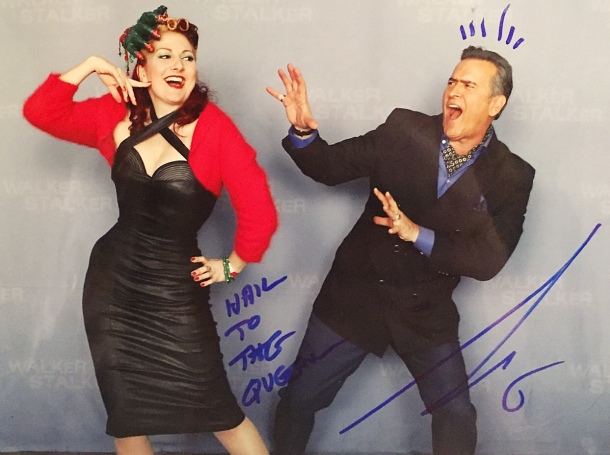 The website advertised a zombie maze so I was really looking forward to that! Oh no, that isn’t included in your entrance fee, you only find out it’s and extra £5 each when you get in there! Worth it? Not a bloody chance. A metal fence and tarpaulin zig zagging walkway with about 6 actors rattling gates or clawing at the air. Only jumpy bit was the chainsaw at the end, but that’s purely because it is so loud.

There were quite a few stalls there, but not as varied as your normal Comicons. Most were selling the same stuff, unofficial cushions and t-shirts, one random one selling bullets in the sizes that some of the characters use in WD (?!?!), a couple of great laser cut acrylic jewellery stalls and a random one selling alpaca toys (yes we got one for Betsy!).

They did have a small stage for a few actor Q&A’s, but if you were stuck in a queue you could hear anything that was being said. 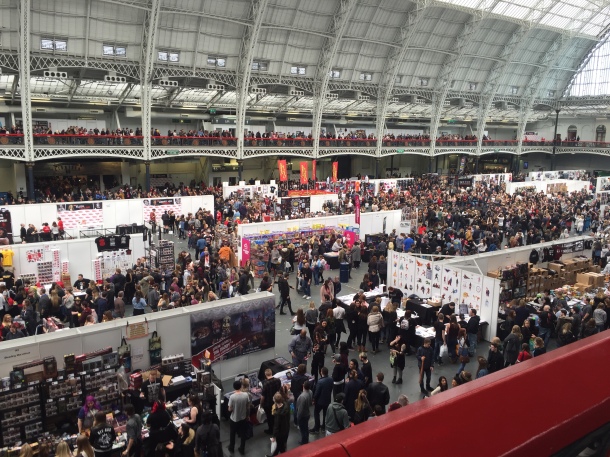 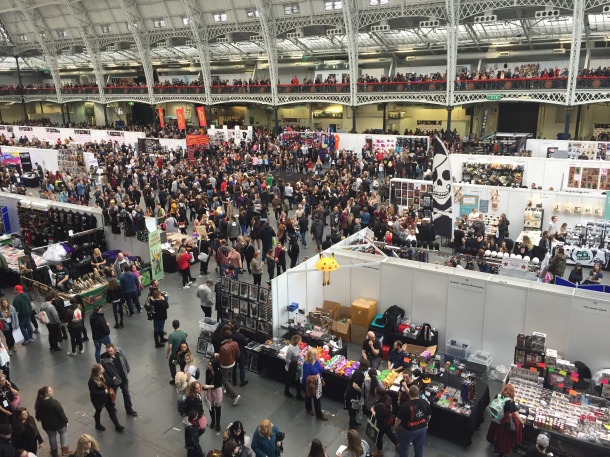 A few people had really made an effort with costumes and looked amazing, but for the amount of people there, I really expected more. 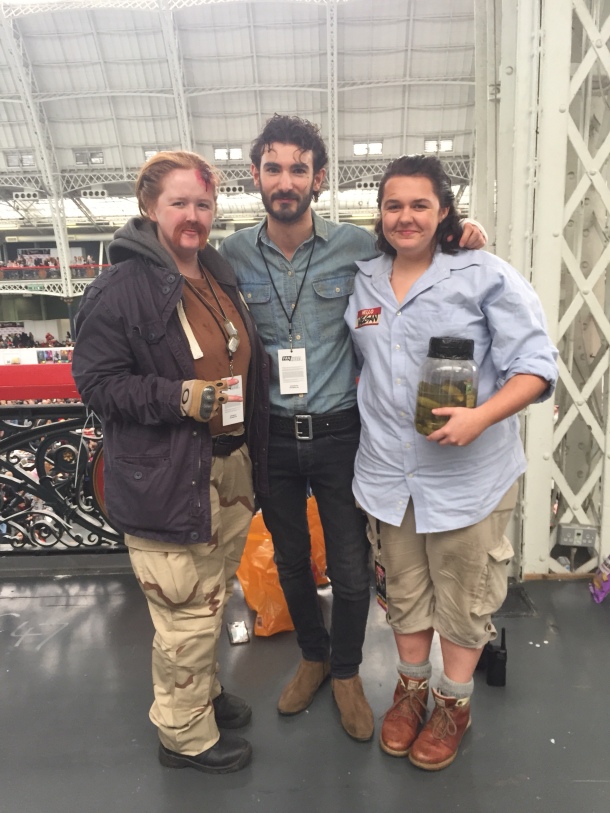 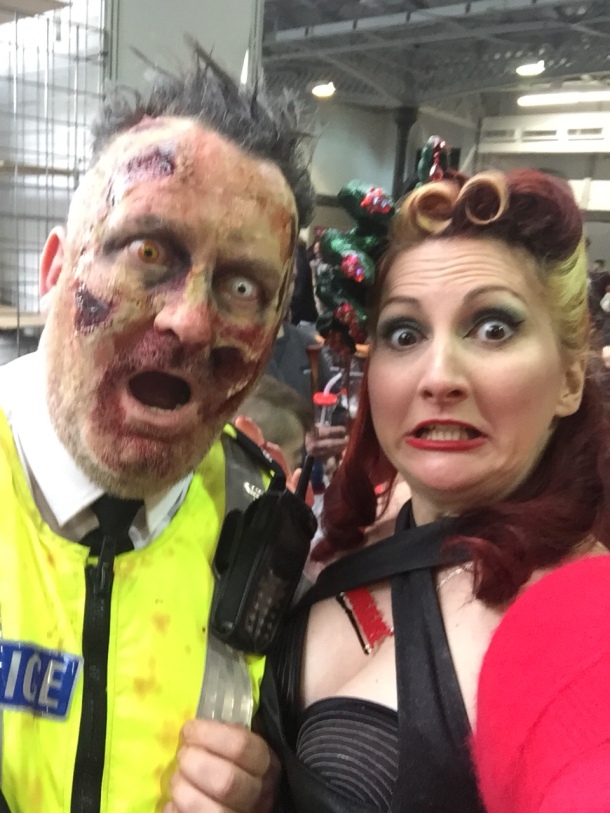 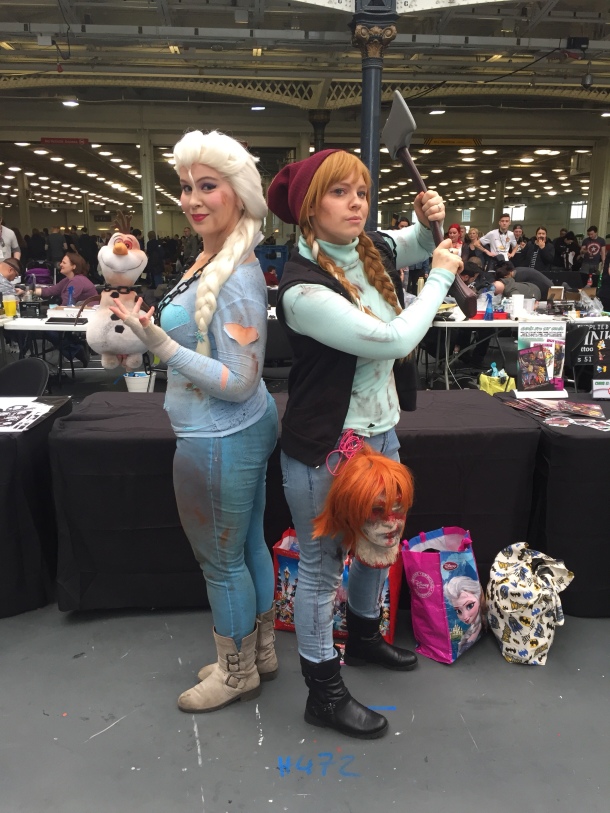 The feedback I’ve had from others that were there and people who have been previous years was that this one was an expensive shambles. Prices have shot up, the ticket scanners weren’t working properly, some people were queuing until midday on Saturday and the whole thing wasn’t worth it.

I made the best of it as we had come a long way, queued for ages and paid a lot of money, but I won’t be going back. It was an utter dream to meet one of my heroes, but I’ll stick to regular Comicons from now on!

Another set for you! Wearing Playful Promises Betty Page lingerie and an incredible custom made robe! Hair by the talented KDB Vintage Hairstyling. 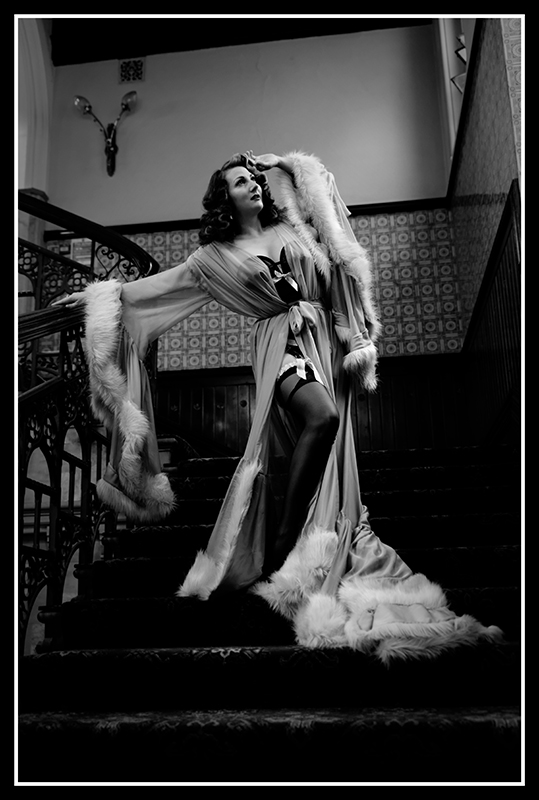 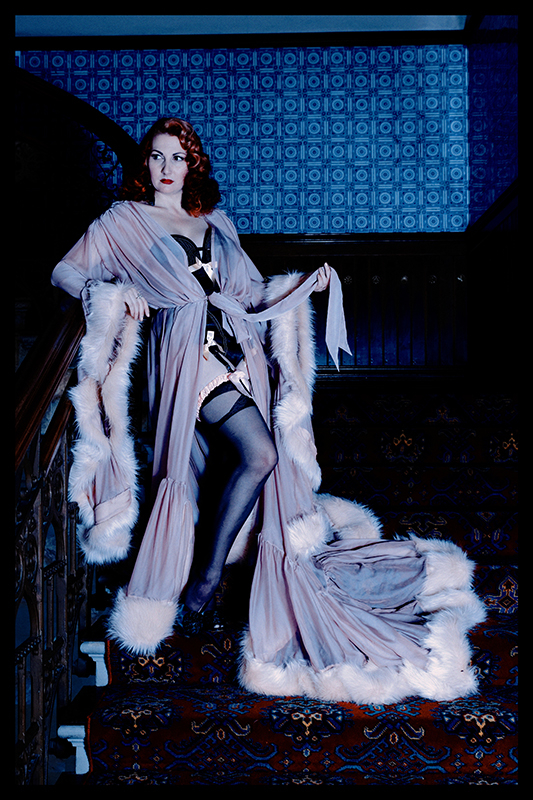 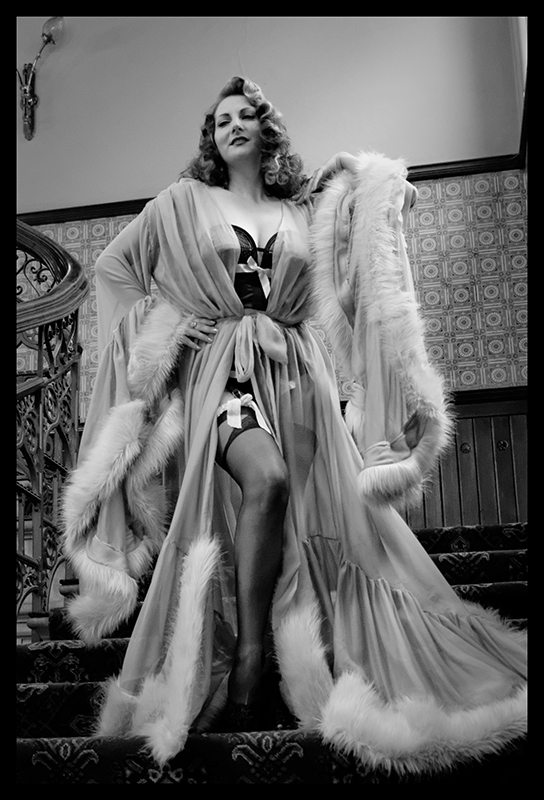 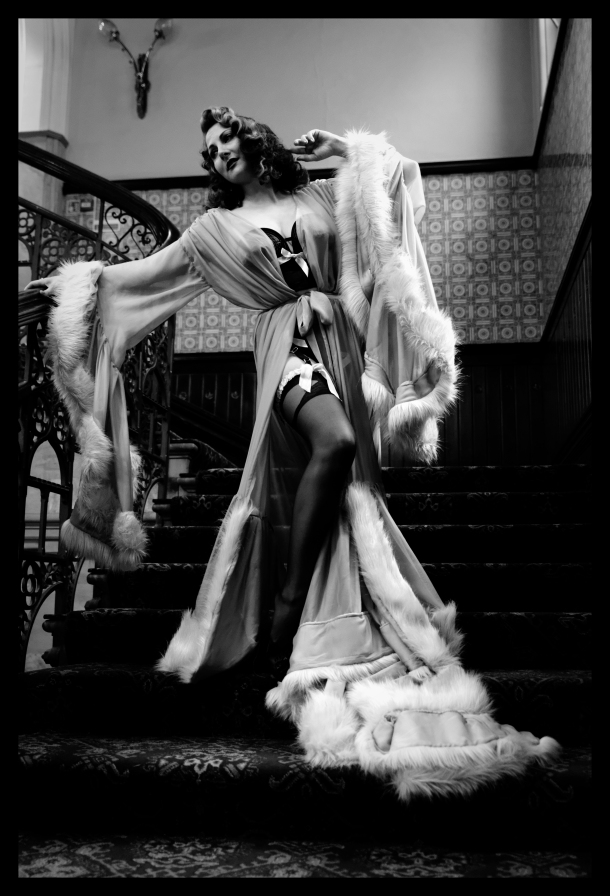 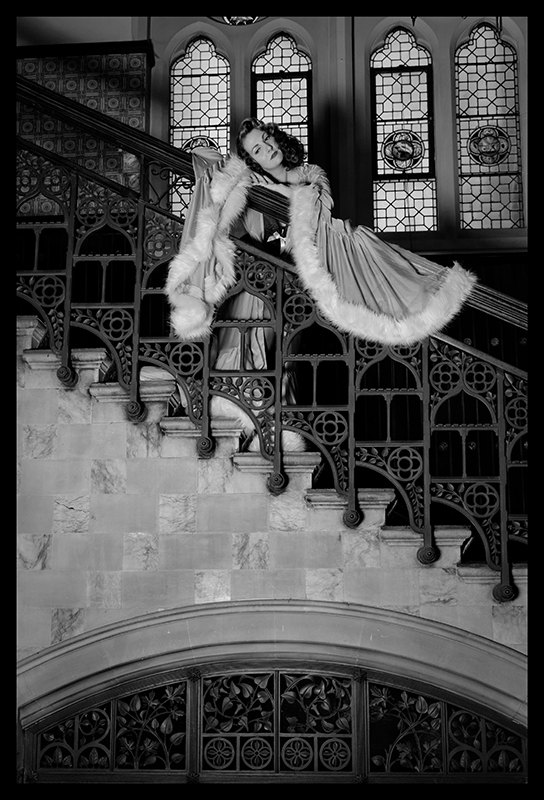 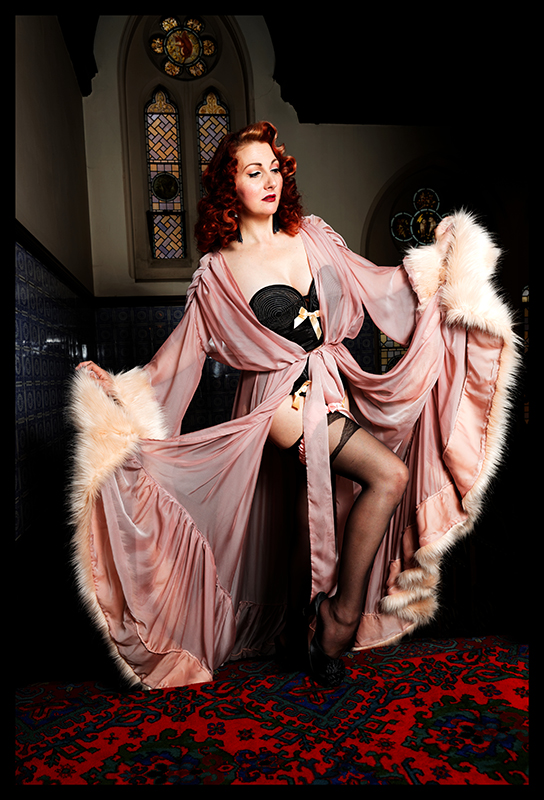 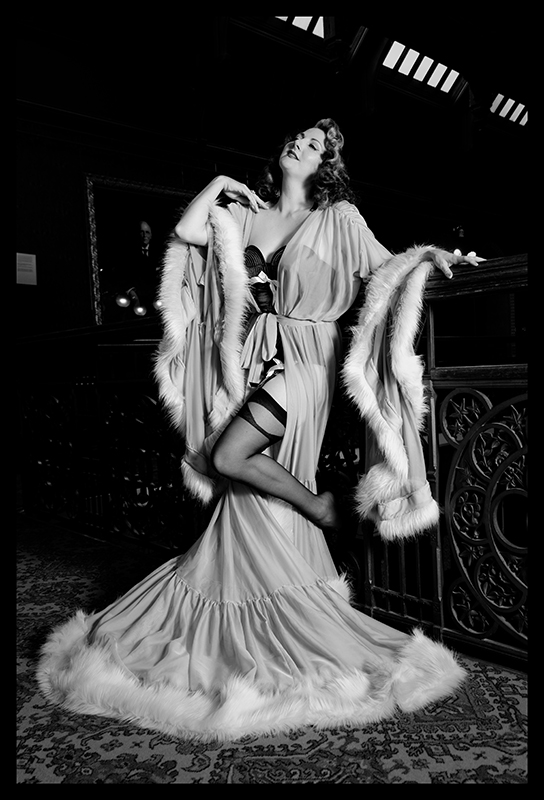 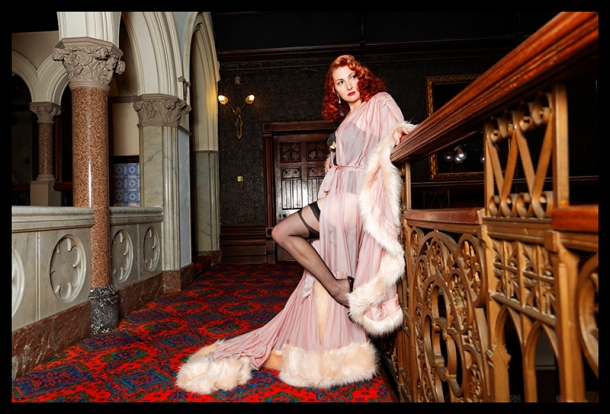 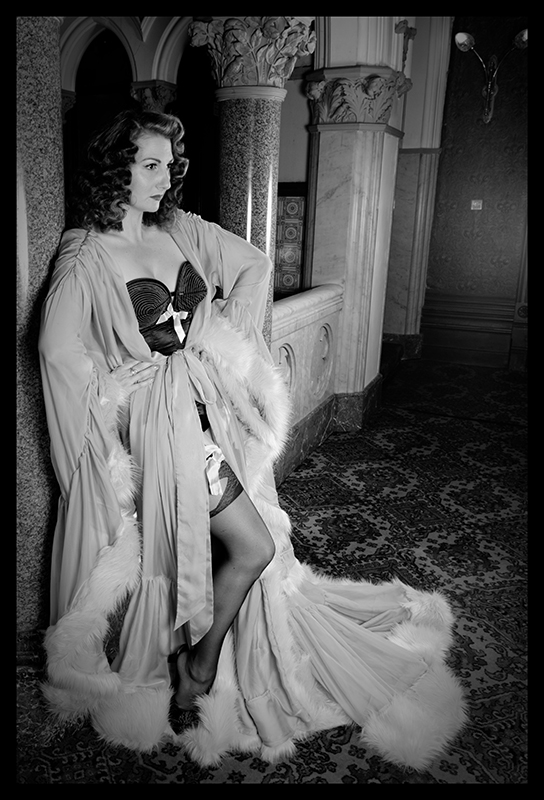