As many of you know, I regularly write articles for the magazine, but issue 10 has a rather big surprise in the middle! Taken by Candee Photography and modelling the Heyday Mary Dress, this pinup poster is perfect for your reenactment camp and already has an aged look to it!

Here is a small selection of photos from the 1st ever War and Peace Revival! More to come I promise, but I wanted to get these up as I know some of you are chomping at the bit!

It was incredibly hot for the whole week with only a short cloudy burst on the Friday. I didn’t get around the dioramas due to a hectic schedule and feeling as if I were walking through treacle from the heat, but did get to the Vintage Village and the rest!

Kitten with Vicki Michelle and Sue Hodges of ‘Allo ‘Allo! Taken by RvM

Kitten the poster gal! Check out the monster banner behind! Yowza! Taken by RvM

In the Vintage Village Display watching Beverly teach someone how to darn a sock!
Photo by Kitten von Mew

Wet stocking been dried in the Vintage Village with Mr Mew behind! Taken by KvM

A vintage pantry display in the kitchen diorama. Taken by KvM 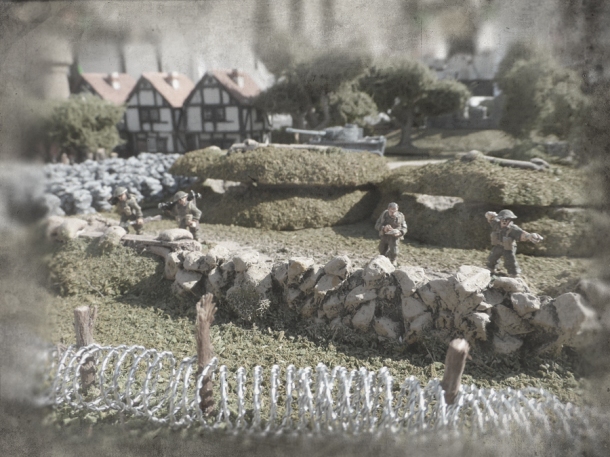 Toy soldiers for sale in the market place. Taken by KvM 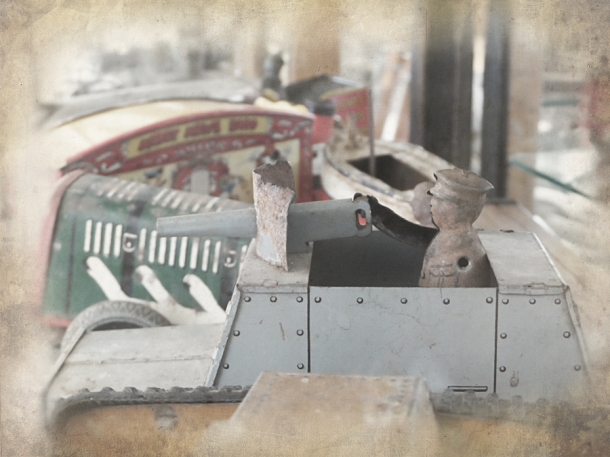 Sincerely Yours, Swingtime Sweethearts, Viv the Spiv and Kitten von Mew in the V Marquee 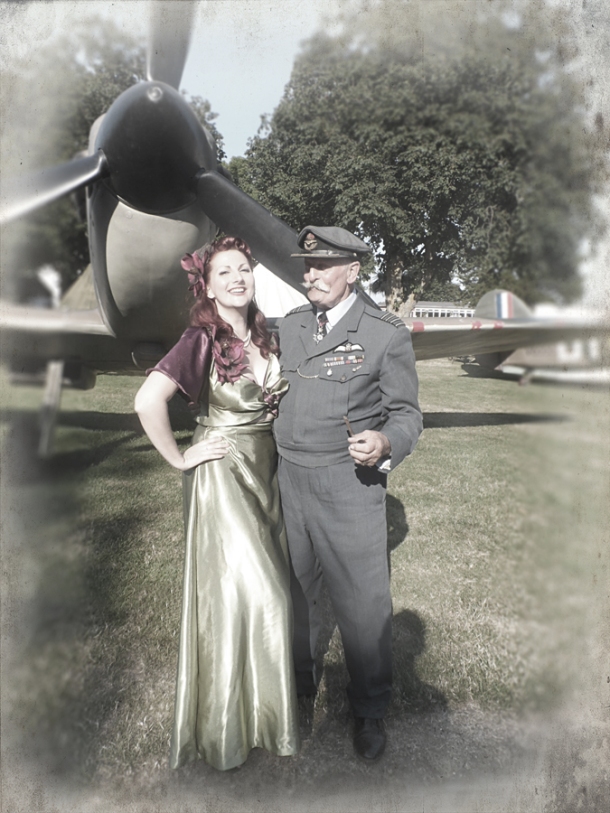 Kitten von Mew and her wonderful ‘Colonel Whiskers’, her favourite at the events. Taken by RvM 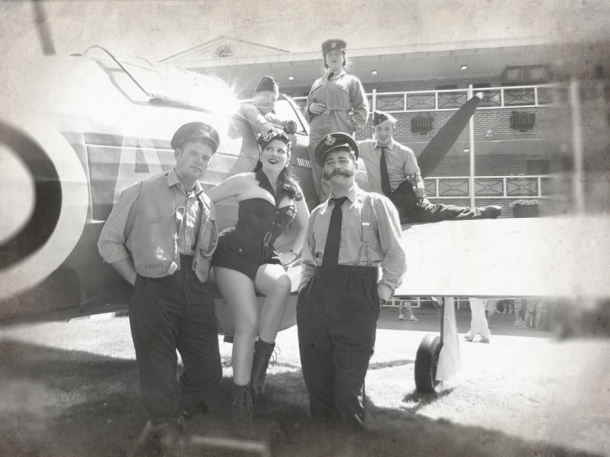 More to come I promise!!!

I came across this lovely article on ‘tinterweb’ tonight so thought I would share! I also wanted to let you know my performance schedule for the War and Peace Revival Show. This is liable to change, but should give you some sort of timings to aim for. There will always be someone on hand to ask in the Victory Marquee!

Saturday – 1 daytime performance and 1 evening performance (as part of a “floorshow” cabaret with the John Miller Orchestra) – both Family Friendly. Around 3pm and 8.45pm

I will also be doing picture and Military World Magazine signings, so make sure you collar me when you get the chance, because this will be one busy kitty!

See you all there!

My Passion for Burlesque and WW2 Pinups

Kitten as Carmen Mewanda with her caravan Gracie Wheels

Burlesque was a tricky thing to bring to the 1940’s scene.  I had been performing in Burlesque theatres for 4 years on and off and although I kept to my traditional style, the Burly fashion around me was starting to boom and progress into more diverse acts – Latex, fire breathing, axel grinding, nudity and even bathing in blood.  I wasn’t part of any of that and although respected the art, I couldn’t relate to the alternative side of it, as my passion was the 1940’s and 50’s.  When I was first immersed into the underground world of Burlesque tease, it was still pretty much an unknown, unappreciated art form.  I enjoyed it because the crowds were usually filled with eccentric young people who got to show their creativity and elaborate on this through fashion.  I remember one young man in particular who wore a top hat and tails with a fox fur stole.  It somehow worked and he walked around with an extravagant air with a transvestite in a gold spangley dress on one arm and a rockabilly chick on the other.  I loved this strange world as I was far from ‘the norm’ myself and came from a creative background with 2 artistic parents and a Great Grandmother who ran off to Paris to be an entertainer (although that is where the love of the stage stopped and hop-skip-jumped a few generations).

I had already been the face of Festival of Flight at Blenheim Palace in 2005 and 2007 but did not perform at WWII events until 2009.  It wasn’t until a rather bad experience in London that I was forced to rethink my performing career.  Although it was more of a rather expensive and exciting hobby than bread and butter, I felt almost forced to give up a passion that had helped me gain confidence about my body and given me a way to channel my hands-on creativity (through costume) and my love of entertaining.  I approached the USO Shows and introduced myself, my passion for the 1940’s and that I wished to perform some authentic, yet family friendly fan dances with them as they would have had for the troops in WWII.  It was always going to be a 50/50 chance but luckily Kieran saw the opportunity for something different and agreed to give me a go at a dance held locally to me.  2 weeks before the performance I got the call I was dreading, that they had reconsidered and weren’t sure it would be suitable.  I stomped my foot hard and demanded that they give me a chance to prove my worth, I needed this chance to show people that Burlesque was more than boobs and g-strings.  They agreed and the performance went down rather well.  From there I came up with more patriotic inspired routines and danced my way through the War and Peace Show, Bethune Victory Weekend, county fairs, Blitz Balls and more with my USO family.  I met praise and prejudice on a monthly bases, but understood that people at the events may not have come to see a Burlesque performer.  I danced with the same coverage as a swimsuit, making each dance whimsical as well as graceful and focused my attention on the children and women of the audience as much as the men.  My fan base grew and people finally started warming to me, now realising I was not a threat to their marriage and just a gal enjoying what she does!  The only adult based performances I would do were past the watershed at the War and Peace Show or other events that specifically requested it. 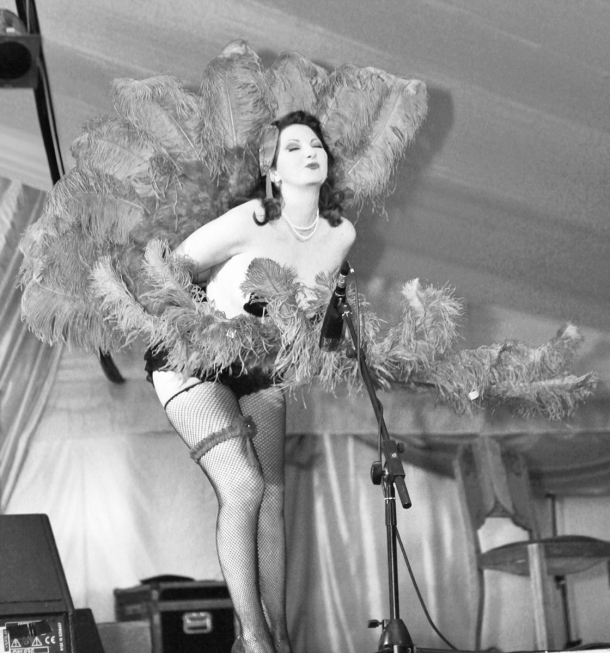 I have always admired dancing girls from a very young age.  I loved watching black and white movies on Sunday mornings as a child and studied the curvy dancers, their beautiful costumes, nipped waists, long legs, happy smiles and perfect hair.  Boy did I want that!  I was a tom boy with a closet passion for being glamorous.  A late developer with no body confidence, but an entertainer, artistic nature and flare for anything that sparkled and shimmied.

Burlesque in the 1940’s was popular with the troops.  Thanks to the likes of Starlets such as Betty Grable, Ava Gardener and the pin-up art of Vargas and Gil Elvgren, the female form played an important role in WWII.

As lady luck figures on aircraft, calendar lovelies, poster girls and entertainers, those wartime belles gave the soldiers something else to fight for, a little sweet daydream and a reminder of the women back home.  USO and Stagedoor Canteen hostesses would not only help serve food and entertain the fighting men, but dance with them, talk and hold their hand whilst they ate.  A girlfriend for an evening to lend an ear, but the soldiers were never allowed to discuss the war, what they were doing or where they were going.  These girls became an escapism and a truly important part of getting through the hard times.  It was the same with the Burlesque beauties.  They became an entertainment so spell-binding that for a split second those men would forget about the disasters they had witnessed, the friends they had lost and the home sickness.  I wanted to portray those women, the glamour in hard times, the USO hostess that would dance and chat, the Burlesque girl that would entertain and raise a smile and transport you right back to the 1940’s.

So here I am, I dance with the reenactors whether they know the moves or just want to sway, I lend a hand where I am needed, I chat, I laugh, I perform, I even sing now would you believe it!  But do I help people in the way the girls did back in WWII?  Probably not, but I offer escapism from the modern world, the stresses of day to day living, the hope of better things to come.  I transport people back to a different era, where glamour was kept up through times of struggle and hardship.  Where music and dancing filled people’s hearts with joy and emotion so profound that even us reenactors get teary eyed at certain songs, knowing how the lyrics must have had prolific importance back then as well as now.  To keep such an important era alive?  So I take some clothes off!  So I wink at the crowd and rustle some feathers!  I’m proud to be a 1940’s Burlesque artist and pin-up gal for reenactors, those fighting for our country in modern war and those fighting for their lives in hospital.  Who wouldn’t want to be part of that?