Alton Towers – The Gardens and House

We did not go to face the big rides and queues! To be honest I wanted to show Mr Mew the house itself and the beautiful gardens, which are somewhat overlooked nowadays. As we climbed down the woodland path with its walls of gnarled tree roots and stone walls, it was still hard to shut out the droning electrical clatter of the cable car. But soon even the screams of happy roller coastering youths were but a hum as my senses exploded with the mossy cool air of the shade to the hot grassy scent in the sun as we reached the old conservatory and ‘Le Refuge.’ 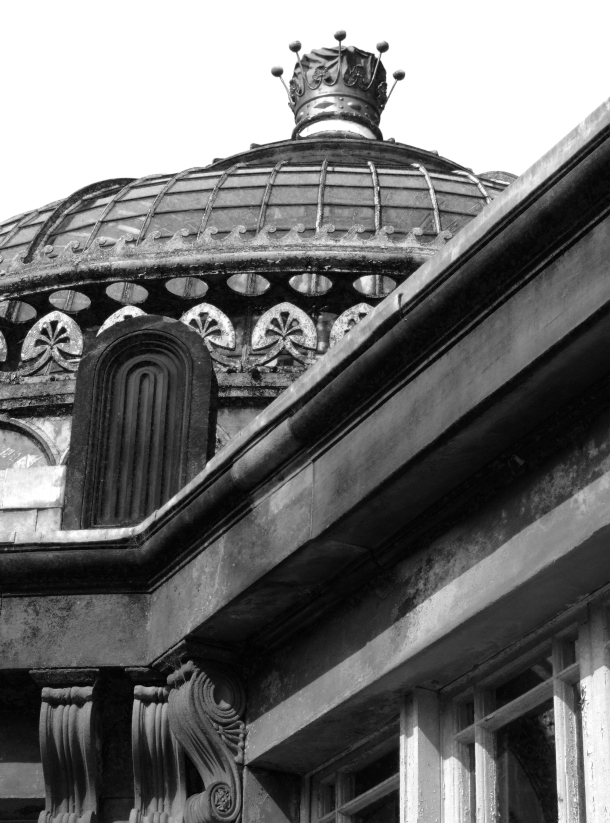 Passing confused teenagers with maps “Looking for Air” and puffed out parties of girls thinking that it would be quicker than the cable car, no one really took in these beautiful surroundings and were more hell bent on finding the next death defying ride. If only they were to stop for a breath! Look at the stunning lake with its oriental pagoda! Take in the shadows and stillness of the once tropically cultivated conservatories! Imagine the harpist that lived in the little thatched cottage and was hired to fill these gardens with music! But no, they just hitched up their low cut jeans over their crystal embellished g-string and muffin tops and sauntered on towards the shouts and smell of fast food.

The cobwebbed light of the conservatory, taken by KvM

I was in awe of the conservatories. The paintwork had baked in the Sun and cracked to show all of its original colours underneath. 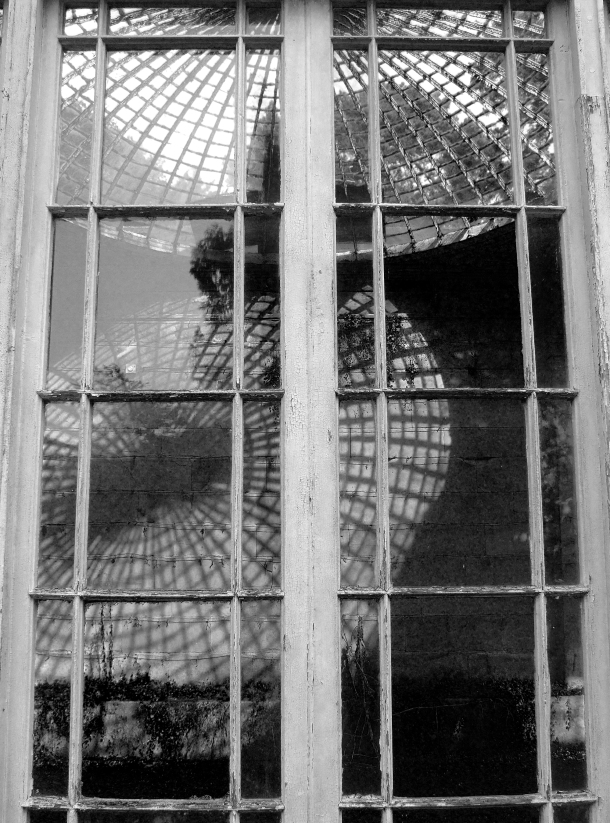 Through the window, taken by KvM

A solitary palm tree, planted in one of the beds had grown large and broken through one of the glass roofs to escape the loneliness within and a large stone pool once filled with fish and a splashing  fountain now lay empty and full of creeping weeds and broken glass.

From the grounds to the house itself, which is now a shell and houses the Hex ride; There is little of the interior that you will get to see unfortunately. There do seem to be renovations going on, but no word on if this will be historical, a posh restaurant or just another ride. The chapel, with its beautiful hand painted ceiling and stained glass windows is accessible! Unfortunately the ornate alter and paneling was sold many years ago, but a small example of this is framed on the wall with a new reproduction next to it). At first it just feels like an empty room, but you soon find yourself immersed in the ceiling, the restored angels and old side windows with their intricate detailing. 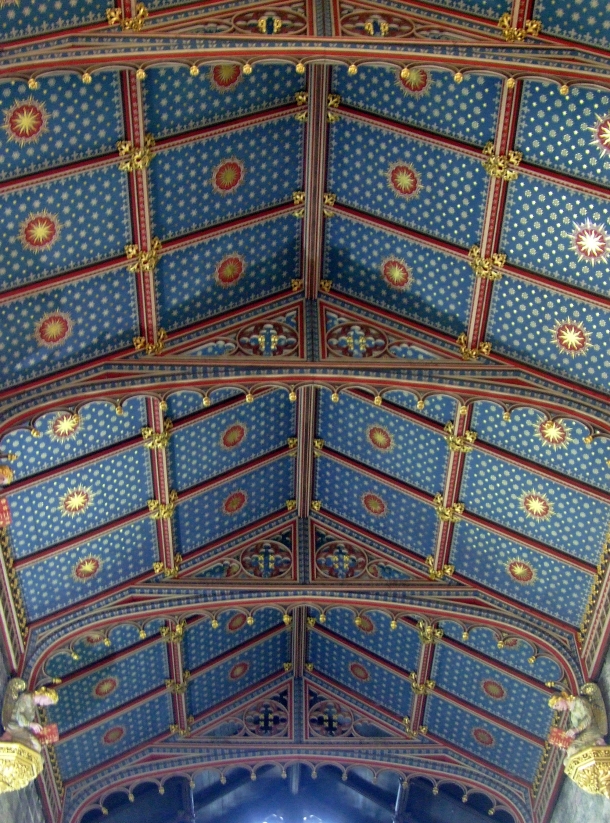 The ceiling in the chapel, hand renovated with angel statues. Taken by KvM

I wasn’t a big fan of the main window, which is a modern piece designed by a local artist. I was however a lover of the colours that were projected on to some of the walls of the room:

When exiting the chapel, a conservatory walkway is visible and also serves as part of an exit for the Hex ride. This is currently being restored and some of the original beauty is still visible!

Fresco on arched doorway, leading from the conservatory hallway to the main house, taken by Kitten von Mew 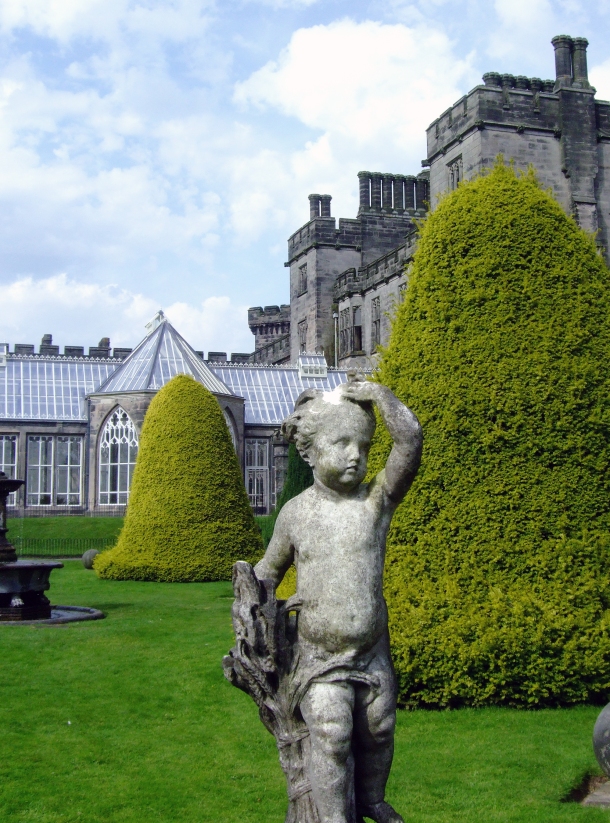 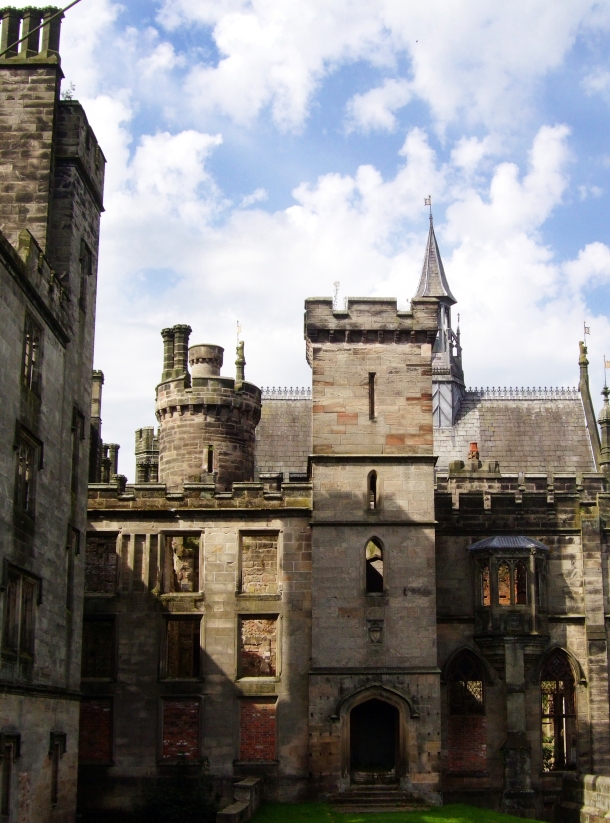 It was not hard to visualise what this place had been like in it’s heyday. So full of music, laughter and entertaining! But I guess that is what it is now, just in a different way.

A short history on Alton Towers…

It was thanks to the 16th Earl of Shrewsbury that Alton Towers became such an amazing Gothic mansion. Hiring the famous architect Pugin in 1837 to add extra rooms for the ever growing family and art collection, Alton Abbey was transformed into Alton House. His budget was luckily not on the small side, so lavish vaulted ceilings, amazing carvings, light fixtures and fresco’s were a few of the additions brought to the home until the untimely death of Pugin in 1852 and then the Earl’s unfortunate passing from Malaria a few months later.

Unfortunately the 16th Earl’s cousin Bertram, aged 19 years, inherited the estates and title but died within 4 years, although in that time built Shrewsbury Cathedral with Pugin’s eldest son William and finished the work at Alton Towers.

After the 17th Earl’s death there ensued a bitter fight for the title and grounds as he was last in line of the Talbot heirs.  He had arranged in his will that the deeds were left in Catholic hands with the Dukes of Norfolk, but this was unfortunately over-ruled and Henry Chetwynd-Talbot took over the great estate. Unluckily for him, this did not include the contents and his celebration meal took place in a rather empty building. In 1857 the executors of the estate had sold off most of the contents in over 4000 lots at auction. Due to the legal action, the 18th Earl’s finances weren’t exactly flush and he could not replenish the lost beauty up to scratch. There was a miss-match of furniture and only basic maintenance upheld. Henry’s main home Ingestre Hall still remained his main abode other than when it suffered a large fire in the 1880’s.

It was in the 1890’s that the 20th Earl Charles Henry John Chetwynd-Talbot (are you keeping up?!) decided to open up the lavish gardens as a tourist attraction. 1000’s of people would attend these open garden events which would include circus acts and fete stalls! In 1896 the Earl divorced his wife and left the impoverished ex in Alton Towers, with no money to maintain the building. Most the estate was sold off in 1918 with the house being sold in 1924. This included a mass auction of the rest of the contents.

The house was never to be lived in again. It was finally passed onto the Talbot family again and the main dining room was transformed into a tearoom for garden guests in the 20’s and 30’s.

During WWII the house was used by the Cadets and they looked after the house very well considering! The house seemed in good stead until 1952 when the owners decided to blame the armies occupants for all manner of excuses to strip out the remainder of anything valuable.

From roofing to floorboards, local residents watched van loads drive out of Alton for weeks. The rest was then set alight in a big pile at the Eastern end of the big house, leaving but a shell. In the 1970’s some of the floors were re-instated to provide some menial structural support.

I have heard many stories, myths and legends about Alton Towers including the original gardens being created in dedication the the Earl’s deceased wife, so that he may be closer to her in heaven, but I do not know which Earl this was or if it is even true!

One thing that is true though, is the tale of the chained oak tree that you may see snippets of in the Hex ride. There is indeed a chained oak between the gates and Alton village. The 15th Earl demanded every branch of the tree to be secured after running into an old beggar woman who cursed him for not giving her a coin. He dismissed her at first as she shouted “For every branch on the Old Oak Tree here that falls, a member of the Earl’s family will die.” , but a violent storm ensued that night and a branch fell off of the tree and a member of the family died.

Whether or not this is all true, the tree and it’s chains remain.

Vintage pinup girl in Great Britain, singing at WWII events, vintage fairs and Blitz Balls with 1940's, 50's and Christmas classics. I also model for Heyday Online, Luxulite Jewellery and have been featured in many publications including Vintage Life, Daily Telegraph, WW2 Reenactors Magazine and more. My other interests include creating Steampunk hats and accessories, writing, being a mother to Betsy Boo, vintage fashion and flea markets! I run a none-profit crafter's group in Snitterfield every week to help combat loneliness, depression and more.
View all posts by Kitten von Mew »
← BBC’s Wartime Farm Book by Octopus Publishing
Goodwood Revival 2012 Photos! →