‘Put Your Money Where Your Mouth Is’ Filming

On Sunday evening, Mr Mew and I headed to London for the filming of Put Your Money Where Your Mouth Is! This fantastic BBC programme follows antique experts in trying to find bargains at flea markets, carboots and antique shops, then selling them on for a profit.

I first met Katherine Higgins (one of the antique experts of the show) at a publicity shoot for Vintage at Goodwood and we hit it off straight away with a love of vintage clothing, hats and Art Deco! 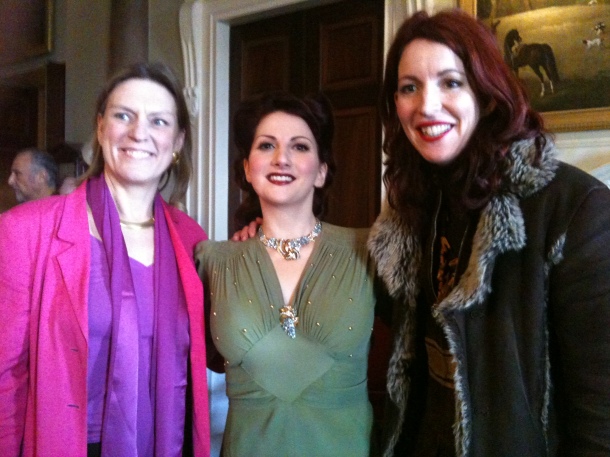 Katherine and I kept in touch at odd intervals and vowed to do something else together. The opportunity finally came with the Antiques Roadshow last year, where I showcased my Art Deco 3 piece suite! Katherine wasn’t going to do the show (filmed at Charlecote Park), but suddenly there she was on the day! We had a great time chatting between takes and it felt like we were old friends.

I won’t give the episode away too much, but we filmed in the Volupte Club in London, which is a gorgeous Burlesque supper club. I dressed in my Songbird outfit of canary yellow and pink and brought out my ostrich feather fans, which were then placed on a nearby table. After fanning them out and discussing the shot, we realised that smoke was slowly filling the room like an early 90’s rock video and the ruddy things were on fire! Luckily (although a dreadful smell), the cindered area was picked and fluffed out and barely noticeable after a while. With all the hairspray that must have landed on them in the past 7 years, I thought they would have gone up like a roman candle, so I was very lucky.

We all had a great laugh whilst filming and I had given Katherine one of my pincushion corsages as a gift when she arrived. The complete darling wore it for the entire filming and it really suited her!

The programme will be aired this autumn at 5.15pm on the BBC!

Vintage pinup girl in Great Britain, singing at WWII events, vintage fairs and Blitz Balls with 1940's, 50's and Christmas classics. I also model for Heyday Online, Luxulite Jewellery and have been featured in many publications including Vintage Life, Daily Telegraph, WW2 Reenactors Magazine and more. My other interests include creating Steampunk hats and accessories, writing, being a mother to Betsy Boo, vintage fashion and flea markets! I run a none-profit crafter's group in Snitterfield every week to help combat loneliness, depression and more.
View all posts by Kitten von Mew »
← Vintage Valentine’s Day Gifts
Enchanted Woodland Tea Party →