I found this fantastic doll pattern on Etsy, which is a copy of an original American WW2 doll pattern. It is very basic and that suits me down to the ground! I wanted something I could alter without too much hassle!

I decided to change the WAC uniform to British ATS and a red head (of course!). This was the first time I have tried embroidering a doll face, so was a new challenge for me! The eyebrows are Marino wool to match the hair but the eyes and lips are just formal sewing thread that I tripled in the needle before using.

The pattern includes 3 types of uniform (skirt, jacket, hat and blouse), but because I didn’t want the jacket to open, I just made the front of the blouse, collar and tie out if a scrap of one of Richard’s old USO shirts! I had used the other half of it for an act, so glad I kept the scraps!

The wool fabric was bought at a local haberdashers and although expensive by the metre, I only bought a 30cm width so wasn’t too bad and I have enough left for a matching boy doll and more. I also bought a sample swatch of leather as the pattern used more embroidering to depict shoes (literally just shoe laces). After some playing around I came up wit a basic pixie design and matching belt.

Here is my first attempt… 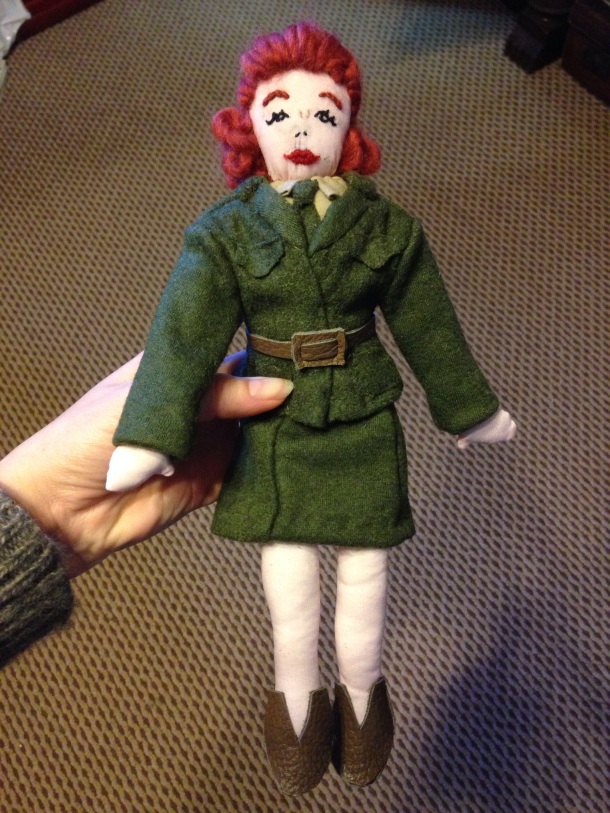 ﻿So, I was quite pleased apart from the head. The doll ends up with no neck, so I tried creating one which wrinkled the face and my stupid permanent pen guides I had drawn for the facial embroidery ended up spreading, making her look like an old lady!

So here you go! The finished doll and, for my first attempt, I think she is pretty good! I want to add some buttons on her jacket using thread, but just have to figure out a way to do this.

I am planning to use the pattern for different themes, not just military, but will re-draw the body so that she has more of a neck before trying another one. 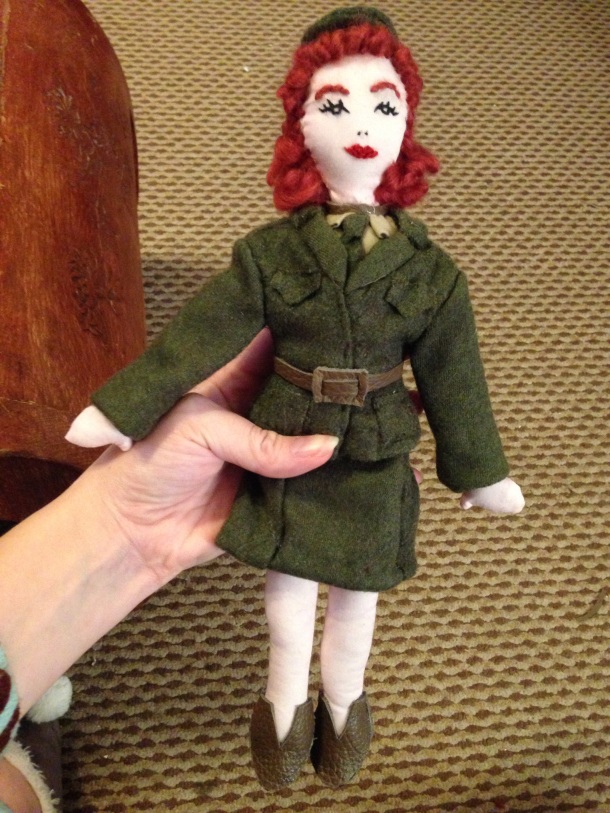 Vintage pinup girl in Great Britain, singing at WWII events, vintage fairs and Blitz Balls with 1940's, 50's and Christmas classics. I also model for Heyday Online, Luxulite Jewellery and have been featured in many publications including Vintage Life, Daily Telegraph, WW2 Reenactors Magazine and more. My other interests include creating Steampunk hats and accessories, writing, being a mother to Betsy Boo, vintage fashion and flea markets! I run a none-profit crafter's group in Snitterfield every week to help combat loneliness, depression and more.
View all posts by Kitten von Mew »
← 2015 Performance Dates Added
Vintage Maternity Suit →